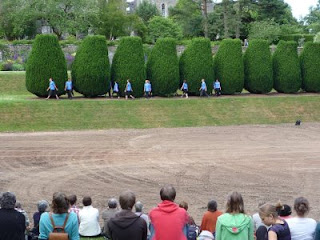 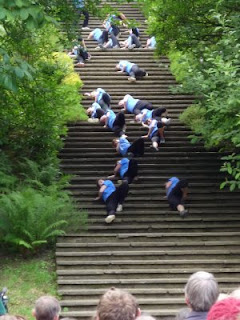 On Saturday 20 June 09, I saw Stephen Koplowtz's Task Force, a site specific dance performance in the Tiltyard at Dartington Hall. This was the first event in a series of site specific works that ran right through the week in various Devon locations. Local collaborators had been found, including student dancers and their teachers, production, costumes, a music director, the whole organisation is very impressive. The performance I saw began with a herald figure running through the garden calling to the dancers, then, one by one, they were seen slowly rolling down a large stone staircase to one side of the Tiltyard. After a while there were lots of dancers, maybe two dozen, and every so often one of them would get up to do some standing dance for a few moments. Then it was surprising to see them roll up the stairs.
The next routine was using the stepped sides of the Tiltyard. When the dancers were lying down we couldn't see them from below. When they sat up we could see their heads and shoulders popping up over the grass banks. They used three rows of the grass steps and played a game of appearing and disappearing, some dancers jumping up together, all of it organised to make different groups of uniformed dancers appear in patterns.
For the third section of the performance the audience was shepherded onto the same slope of the Tiltyard so that we could look across at the twelve apostles, a group of trimmed yew trees on the top of the Tiltyard slope. The dancers began by running in and out of the row of trees, something like a May festival dance, then they got into positions behind the trees and different groups came forward or stayed hidden, there were virtuoso dances from some individuals and there was more group work working through and around the trees. It was a really fine spectacle making the most of Dartington's beautiful gardens, dancers at different stages of their training, some school and some college students. There was a big audience and this event coincided with Dartington degree shows.
Posted by Tony Lopez at 17:38 No comments: