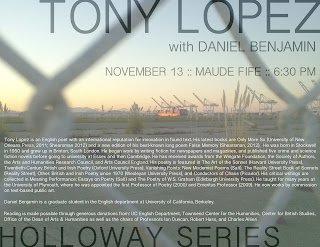 I'm just back from a series of readings in USA. I went into New York on 31st October on a flight from Heathrow that I was expecting to be cancelled because of the aftermath of hurricane Sandy -- but the flight was fine and there were cabs running from JFK. I got to City Island late in the evening and everywhere was dark, no power, and trees on the roads, evidence of flooding everywhere. The next day I flew from La Guardia to Buffalo to begin readings. Steve McCaffery and Karen Mac Cormack picked me up at the airport and took me to the hotel. I had a great time in Buffalo, we had dinner with Yevtushenko which was a pleasure and turned out to be better than his stage act, really hammy. It was one of those readings that go on much too long, people were leaving, the show ended with him singing Lara's Song from Dr Zhivago out of tune, absolute self-indulgence. He certainly drew a crowd, filled an enormous venue, and got a long standing ovation.
My first reading was in the back room at Rust Belt Books, downtown Buffalo, there was an art opening going on in the book shop when we arrived. I had a great welcome and a terrific audience in Buffalo. I got to visit the Allbright Knox museum for the first time, a huge and wonderful collection of modern art. Back in New York I got a chance to see my nephew Harry play soccer for a local Bronx team.
At Philadelphia I read upstairs at Milano's Pizza with Rachel Blau DuPlessis. The series is run by CA Conrad making things happen in Philadelphia. I can't really imagine a more unlikely venue, but a great atmosphere and a brilliant audience including Ron Silliman and Krishna, Bob Perelman and I met Frank Sherwood who had seen a previous reading of mine at Kelly Writers' House. Rachel used the occasion to read the last section of her epic poem Drafts (she'd been saving it up to read at a Philadelphia venue). It was a real pleasure to read with Rachel and to spend time with her and Bob. We went out for dinner at a very good Italian restaurant in the city centre and the next night to Bob Perelman's and Francie Shaw's house to watch the US election results come in. Whilst in Philadelphia I saw Dancing Round the Bride, a show about the influence of Duchamp on John Cage, Merce Cunningham, Robert Rauschenberg and Jasper Johns. I hadn't seen Merce Cunningham dance before, even though I'd read about his work at Black Mountain College and his famous dance company. It was an education to see video made by Charles Atlas who was film maker in residence with the company.
Next day Rachel and I travelled to New York on the Bolt bus and spent most of the day at the Metropolitan Museum of Art. Whilst we were looking at the modern galleries, a blizzard was developing across the city and by the time we were ready to go downtown and get some dinner before the reading, the conditions were bad enough to make walking difficult and crossing roads treacherous, deep slush sometimes breaking through to unexpected pools of icy water at the kerbside.
Our reading at the Poetry Project, St Mark's Church, was in a series organised by Stacy Szymaszek. Rachel was introduced by Rachel Levitsky and I was introduced by Arlo Quint.


I stayed in New York for a couple of days, met up with my old friend Peter Nicholls for lunch one day and then travelled on the Amtrack train to Providence, Rhode Island, where I stayed with Rosmarie and Keith Waldrop and read at Ada Books in a series Publicly Complex, organised by Kate Schapira. I read with Anne Gorick, Meg Fernandes, and Youmna Chlala. I was surprised to be put on with three other readers in a bookshop reading, but it worked really well; we had a great crowd and a terrific atmosphere for the readings. It was wonderful to spend some time with Rosmarie and Keith, really good and generous friends, and I also got to see an exhibition of Keith's collages at Po Gallery, 155 Westminster Street, Providence. In fact there were many more collages in the room I was sleeping in than in the gallery, but it was good to see them set out in a proper display.
It was a long journey from Providence Rhode Island to Berkeley California via New York. When I got into the taxi at San Francisco airport it felt completely different, very warm speeding on a dark freeway along the bay shore. I stayed at the Hotel Durant right next to the Berkeley campus for a week, which was a pleasure. I was met for drinks by Lyn Hejinian, Geoffrey G. O'Brien and Keston Sutherland. I got to visit my cousin Roger Housden who lives in Larkspur in Marin County. I read in the Holloway Series on Tuesday 13th November with Daniel Benjamin who read a long poem about being a visiting student on a fellowship to Cambridge. I was introduced (thank you) by Jill Richards. It was a pleasure to meet Catherine Walsh a poet whose work I've know and read for some years, also to meet Cecil Giscombe, Robert Kaufman, Alan Bernheimer, Robert Hass, Dan Blanton, Eric Falci, and to see Kit Robinson, Jean Day, Charles Altieri, David Marriott and John Shoptaw, all of whom I'd met before. Later in the week I saw a terrific reading by Keston Sutherland and John Wilkinson and then on Friday 16th November we all took part in a colloquium Boundless Poetics. I know it was a whole committee of Berkeley people who organised these events but I'm especially grateful to Lyn Hejinian for including me and doing extra work to make it happen, what an amazing company is assembled there. 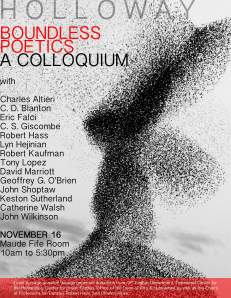 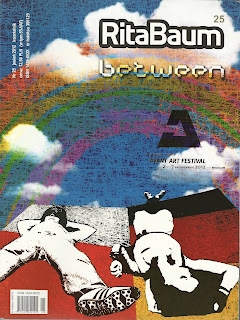 My poem 'Corneal Erosion' from False Memory has just been published in Polish in the journal Rita Baum, 25 (2012) 45-48, translated by Jakub Gluszak. It's a few years since I first heard from Jakub that he would like to translate something from False Memory and I'm really happy to see a copy of the journal. I wish I could read the article 'Maszyna Do Pisania' which seems to be about typewriter poems and conceptual art and includes stunning works by Zbigniew Makarewicz, Roman Gorzelski, Wojciech Sztukowski, Marzenna Kosinska, Marrianna Bocian and Stanislaw Drozdz.
Posted by Tony Lopez at 11:32 No comments: