SOME TIMES BY HARRY GUEST 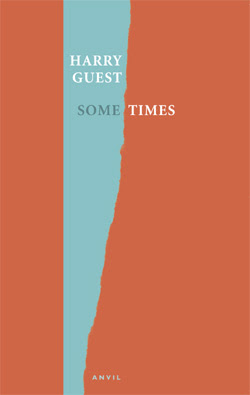 10th November I went to the Exeter launch of Harry Guest's new book Some Times from Anvil Press. This is the first literary event I've been to in Exeter Central Library. It was a really fine reading, as expected, sensitive, beautiful poems and Harry's readings bringing them immediately into sharp focus. 'The Custard Mountains' is first one in the book about a young boy mishearing a word in a radio performance of a Lorca poem. It would be a funny story anyway but with Harry Guest's verbal invention of exotic landscapes in variations of yellow we are led into the daydreams of childhood imagination recovered through unreliable proliferating memory. And the poem's humour and imagination is a tribute to Lorca. It's a generous intelligent book by a restless and passionate writer. Of course Harry Guest draws a good crowd in Exeter and the event had that buzz with a big queue for signed books, a good night for Anvil and the library. The cover design of Some Times is by Tamasin Cole, based on a painting by Piran Bishop.
Posted by Tony Lopez at 16:36 No comments:

I failed to write anything about the British and Irish Contemporary Poetry Conference back in September because it was a difficult and very busy time. The second in a useful series organised by various collaborating universities British and Irish Poetry 1960-2010 was held at the Seamus Heaney Centre for Poetry, Queen's University of Belfast, 15-17 September 2010. There were keynote papers by Sir Christopher Ricks, William Logan and Angela Leighton, and readings by Belfast poets Michael Longley, Ciaran Carson, Medbh McGuckian, Sinead Morrissey and Leontia Flynn, with a panel of poet-publishers: Michael Schmidt, Don Paterson and Peter Fallon. Another session of readings was given by Michael Schmidt, Don Paterson, Gerald Dawe, Christopher Reid, Peter McDonald and Peter Fallon.
I was in a panel with James Cummins of University College, Cork who spoke about Tom Raworth's use of self-reflection and repetition in Writing and Catacoustics, with Lacy Rumsden who read a paper 'Reading Prynne Aloud: Constraint, Orientation, Form. I gave a talk on what was then a work in progress 'Only More So'. The panel worked really well, we could have used more time for questions.
The next day I chaired a panel including Neil Pattison of St John's Cambridge on Denise Riley, Robin Purves of Central Lancashire on Tom Leonard and Keston Sutherland, and William Rowe of Birkbeck on Barry MacSweeney. This also was a terrific panel with quite different approaches to some of the most interesting recent poetry written in English. I went to some of the other papers but the thread I was really interested in did not survive into the later sessions. I saw Derek Attridge talking about Don Paterson, Christopher Ricks on Geoffrey Hill and Angela Leighton on various poets including Philip Gross.
Posted by Tony Lopez at 15:15 No comments: