VISUAL POETICS AT THE POETRY LIBRARY 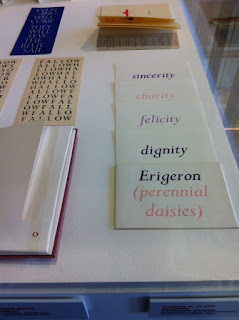 On Thursday 31 January I was the guest poet at Uncut, the local reading series at Exeter Phoenix, an arts venue located off Gandy Street in Exeter, near the Museum. The building looks like an old school and used to be the base for the University of Exeter when it was an external college of London University. Inside the Phoenix houses an art gallery, a restaurant and bar, and a range of different halls and rooms that are used for music, theatre, film, comedy and other arts events. We were in a space called the Black Box, a theatre workshop space on the ground floor. The night that I read was the opening of Maia Conran, The Crowd Laughs With You Always (1 February to 16 March). These are installations of digital works, mostly representing rows of empty cinema seats seen from different angles in grey. There was one booth we couldn't get into and I heard that it was showing a montage of old black and white film clips.
Uncut is run by Alasdair Paterson and Gemma Green and works on the open mike format. Poets who want to read to an audience turn up and give their name to the organisers who set up a running order for the night. Each reader gets a few minutes to present normally two or three poems and then the guest poet does a set. The first 'open mike' session was an hour long. At Uncut they repeat this format. If you went to see the guest poet you could find this arrangement really obstructive and tedious, but of course many of the audience are 'open mikers' and are there to perform. The guest poet ought to bring something special to the occasion.
I remember that when I first moved to Exeter I went to a Festival run on this basis by a series of different poetry groups. My friend the poet Ken Edwards was one of the guests, so I went along and got very impatient with the local performers because I was expecting to attend a reading by the advertised poet. What the format shows, of course, is that the main audience for poetry readings is poets themselves. Giving anyone who wants it a platform to perform is bound to produce uneven results but it does show a particular poetry community to itself, and hopefully creates the conditions to make it self-aware. Of course you can't really assume that there will be progress, because there is no more than 'show and tell'. There is no apparatus of feedback except applause. I've read at the Language Club in Plymouth also, and that runs with the same format.
On 31st January the organisers Alasdair Paterson and Gemma Green opened each half with a reading. The other readers were Norman Jope, Simon Williams, Susan Taylor, Mary Coghill, Liz Adams, Mark Totterdell, James Turner, Jaime Robles, Graham Burchell, Ian Chamberlain and Jennie Osborne. That's thirteen poets apart from the guest poet; I hope I haven't missed anyone out. Exeter Phoenix clearly doesn't take poetry events seriously because they don't show Uncut on the programme posted on their website: so you can't tell who the guest poet is unless you are in touch with the organisers. I have seen some terrific guest poets at Uncut readings, among them Kelvin Corcoran and Harry Guest. I wouldn't miss the next guest poet Gavin Selerie on 28th February 2013.