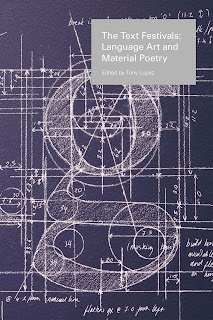 The project that has kept me busy over the past few months is a book about the Text Festivals, curated by Tony Trehy at Bury Art Museum and other venues in the town in 2005, 2009 and 2011. The Text Festival has always been about presenting high quality Language Art from the very different traditions that it emerges. Artists' and poets' works have been displayed together in exemplary curated space with minimal explanation, allowing different approaches in language use to work on each other, making it possible for the viewer to experience an unusual cultural resonance and crossover. Works from Conceptual Art, Concrete Poetry, Artists' Books and Publishing, Fluxus, Outsider Art, Minimalism, Performance Art, Vispo, Language Poetry, Pataphysics, Poetry Video, Conceptual Writing, really anything made of text or performing text or associated sound works have been presented and shown.
I read some commissioned work at the second festival in 2009 with Philip Davenport and Carol Watts. I met lots of people involved with the festival and related events in Manchester. Apart from working directly with Tony Trehy, I got to know Philip Davenport, Helmut Lemke, Kerry Morrison, Robert Grenier, Marianne Eigenheer, James Davies, Tom Jenks, Hester Reeve and others. I spent some time with Ron Silliman who was also on at the Met Arts Centre that evening and we were both put up at the same Manchester hotel. We had a good time at the festival and after the main events there was a workshop day for participants based I think on business development techniques. That was a strange experience like being new at school or going to a training 'awayday' when I used to be an academic -- but one thing that came out of it was the obvious need to mobilise our different skills to make space for our work in common. I was really struck by the urgent need to make progress on focused secondary work. I kept in touch with Manchester friends, especially Tony Trehy, and was involved in the third festival, this time showing some new work in the main exhibition. And later on Philip Davenport edited and published The Dark Would: Anthology of Language Art, a wonderful ground-breaking collection. I took part in the launch earlier this year with Philip, Caroline Bergvall and Simon Patterson at the Whitechapel Gallery in London. James Davies, Scott Thurston and Tom Jenks have been running The Other Room a series of free poetry performance events in Manchester for about five years. The associated website that they run is an important information hub for news of all kinds of cultural events in the Northwest and it helps to maintain online connections nationally and internationally.
It seemed a worthwhile project to try and capture some of the huge range of activity involved in the Text Festivals in another form. I proposed editing a book that would gather contributions from artists involved in the festivals and also retrospectively catalogue exhibitions and events. I'm really delighted that the book was recognised right away by the editor and readers for University of Plymouth Press. It was a new area of research for me and an interesting challenge to write something about the quite separate fields of Language Art and Concrete Poetry as it happened in the UK since the 1960s. Tony Trehy and Philip Davenport have both written chapters about curating, and the other contributors have written about specific projects made for the Text Festivals. It's a valuable and unusual collection right away because of the range of contributors and what they each bring.
This is the contents page but the order has since been changed to fit in the section of 16 colour plates in the middle of the book.

Tony Lopez, Introduction: Language Art and Material Poetry
Tony Trehy, Curating Text
derek beaulieu, The Value of Nothing
Christian Bok, The Xenotext
Liz Collini, Versions
Philip Davenport, An Alphabet of Fishes: Curating Bob Cobbing
James Davies, if p then q three and the Text Festival
Robert Grenier, Bury Memories (whilst yet living)
Alan Halsey, Memory Screen at Bury Met
Holly Pester, 'I did not know till afterwards': An Archive Artwork
Hester Reeve (HRH.the), But the Real Work Was to Place a Stone in My Mouth
Carolyn Thompson, You're so Pretty when You are Unfaithful to Me
Carol Watts, alphabetise // Different Alphabets and Damage Control

I was at the printers in Exeter recently to see proofs and the book looks really good. The design by Daniel Jones is excellent. The front cover (above) shows a detail of Liz Collini's wall drawing Versions. I'll post again when the book is available from the publishers University of Plymouth Press and all good booksellers.

A GARDEN BY JOHN S. WEBB 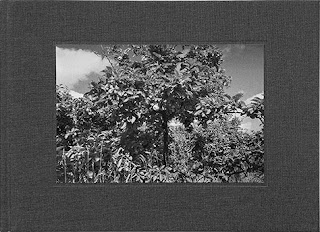