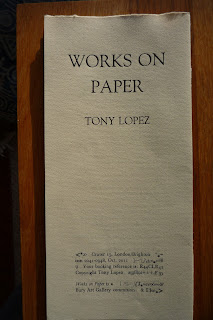 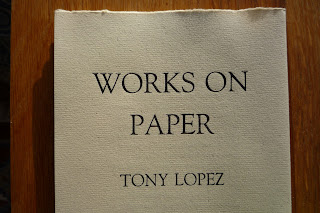 At the apex of modernism in the early twentieth century, Bury in Lancashire was the world centre of industrial paper manufacture. Works on Paper is a serial poem looking through the history and language of that technical innovation and place of trade. The poem was written in 2008, first performed at the Text Festival in 2009, and letterpress printed on 130 gsm Hahnemuhle old antique laid by Richard Parker in October and November 2011, limited to 100 copies at £4.
Works on Paper is Crater 15 published by Crater Press, London and Brighton.
Posted by Tony Lopez at 14:56 No comments: 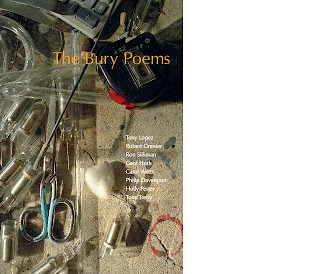 Philip Davenport's Apple Pie Editions published this hardback collection of work related to a number of Bury Art Museum commissions set up by the Text Festival curator Tony Trehy. The book includes a good reproduction of one short sequence '6 Poems' of Robert Grenier's four-colour hand-drawn poems that are best presented as colour plates. If you haven't seen Grenier's colour work this is a useful point of reference. Ron Silliman's 'Extract: Northern Soul' is actually a tiny extract that was made into a neon poem exhibited at the Text Festival in 2011. It figures in the book as a series of 15 photographs by Philip Davenport of the neon manufacturing process including a double spread with the text. The neon is now installed in Bury tram station. I would have liked to see some more of the Silliman poem. Carol Watts contributes a sequence 'Viaduct' that is based on a fatal road accident near Bury in 1840 involving a horse. The poem uses contemporary sources and material from the Bury archives to dramatise a collision of mechanical industrial and animal worlds. The book also includes photos by Julia Grime and Steve Walton, and drawings by Darren Marsh.
My poem sequence 'Works on Paper' is broken up arbitrarily and distributed through the book, out of the composed order, with one section used as a half-title and another as back cover copy.
Ron Silliman's recent chapbook Wharf Hypothesis (published by Lines, NY) is a sort of 'Stranger in a Strange Land' poem describing a train journey in England taken at the time of the Text Festival 2009 and including the 2-3 lines turned into a neon mentioned above. I like the no-nonsense descriptions, Bury Market appears as "off-brand tack / in vast quantity" which it mostly is. The fresh food wouldn't look remarkable to an American, though you wouldn't find that selection of Lancashire produce anywhere else. It's good to read a poem you could argue with, that has a point of view. I'm looking forward to the rest of 'Northern Soul'.
Posted by Tony Lopez at 14:44 No comments: