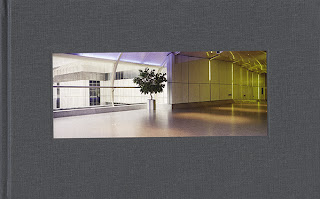 Planted is John S. Webb's latest book of photographs. There are 30 images of trees and plants in containers in various public locations: airports, big hotels, courtyards, out in the street, but mainly spacious interiors. Technically the photos are brilliant but the thing that hits you in the midriff is the way that these trees are captured and cultivated in enclosed, totally unnatural environments. We see a whole range of bright transit routes and lounges in airports, the air-conditioned spaces filled with glass and polish, some of them shiny and new, some of them looking neglected and sad. The trees are isolated from their kind and from the atmosphere, they simply grow and express their species identity. It's a very moving collection of images and the effect of the whole book is really impressive. The eco-theory and environmental movements should catch up with John S. Webb's amazing work in landscape photography.
Cover photo from PLANTED copyright © 2012 by John S. Webb
Photographs from UK, USA, Sweden, Denmark, NZ, etc.
32 pages. 30 images. Edition 550 copies +50 boxed special edition with print.
Hard cover clothbound. Size 28cmx17cm.
Printed by Bulls Graphics/Standartu-Spaustyve, Lithuania.
ISBN 978-91 976852 9 0/ ISBN 978-91 976852 9 9 boxed edition.
Published by Nya Vyer Stockholm. www.nyavyer.se
Posted by Tony Lopez at 15:11 No comments: 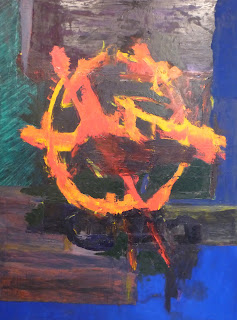 Allen Fisher, Frontal Lobe, oil on canvas, on show at the Hereford Museum and Gallery.
Copyright 2013 by Allen Fisher, shown here by permission of the artist.

On Tuesday I travelled to Hereford to see new paintings by Allen Fisher exhibited at three venues in the town. Three oil paintings are on show at the Hereford Museum and Gallery, two oil paintings are in a mixed show at the Apple Store Gallery and two large watercolours can be seen at the Castle House Hotel. These richly coloured paintings are developed from still-life studies of traps and carpenters' tools and they are the first showing of Allen Fisher's project Engaged Embrace.

"Familiar objects are transformed through vibrant colour and the incorporation of studies of moving figures and urban landscapes. The paintings celebrate patterns of connectedness between the figurative and conceptual in art."

I wanted to actually see these paintings by my old friend Allen Fisher, rather than rely on reproductions, and it was a good decision. I think that the photo above, which is no more than my reference shot with a tiny camera, does at least give some indication of the importance of colour in these heavily worked and sumptuous paintings. They really glow. The train journey north out of Exmouth and into the snowy landscape beyond the flooded lower Exe was a pleasure. The little Penzance to Cardiff train seemed to stop everywhere possible between Exeter and Bristol and then went under the Severn tunnel to Newport. I stayed with Allen Fisher and Paige Mitchell in their house near the train station in Hereford.  It was possible therefore to spend some time with the paintings, including going back again to the Museum Gallery to take some photos on Wednesday morning before I got my train back to Exmouth. 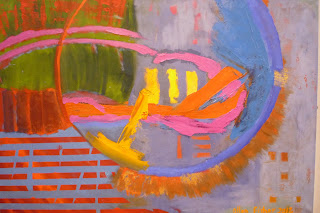 Allen Fisher, Hindbrain, oil and goldleaf on canvas, on show at the Hereford Museum and Gallery.
Copyright 2013 by Allen Fisher, shown here by permission of the artist.