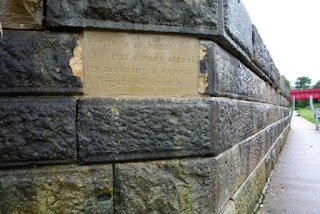 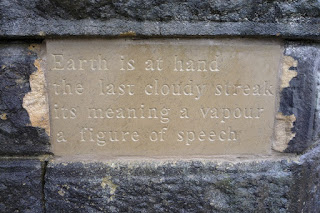 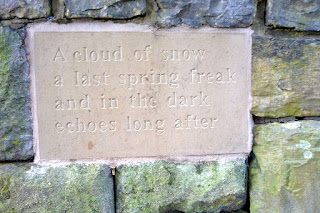 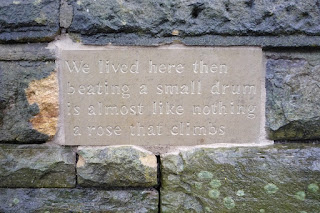 This summer and autumn I've been working on a commission for the Irwell Sculpture Trail that runs from Salford Quays to Bacup, through Bury and Rossendale, 33 miles long and over 70 works of sculpture. My work After is installed in Radcliffe, near the Metrolink Tram Station, on a footpath that leads to the Manchester, Bury and Bolton Canal, and on a bridge support along the canal towpath. There are three stone plaques each with an inscribed verse set into stone walls. The preparation of the stone and the lettering was carried out by Rossendale stonemason Ken Howe.
This is a work that has been at the planning stage for a long time. After, also now known as The Scattered Poem is a 28 verse holocaust poem that was first published in 2000. It is a particularly abstract poem, composed using a text generation programme that was run many times to produce a vast text and the results edited down to a tiny fraction of the output. I wanted to set up a staged composition procedure that would include actions beyond my control. Of course I still needed to be responsible for the finished work and to make it my own by means of editing and refining the result. Mulling over the possibilities of the process, it gradually became clear to me that my ambition for this work just could not be fully realised on paper. It was a turning point for sure. What I now aim to do is to get verses and clusters of verses installed as far as possible from each other, so that the viewer sees only a fragment of the work. If you wanted to see more you'd have to travel, which would always put the work you'd already seen at a distance. In order to get this work established and located in different places I needed to have an example to show. To get it made I need to rely on describing the project and on photographs.
So I've been working with Tony Trehy, director of the Irwell Sculpture Trail, and the stonemason Ken Howe, to find suitable sites and get three of the inscribed verses installed in Radcliffe. It's an interesting aspect of this kind of project that you need to collaborate to get it made and to make it visible. We still have quite a way to go. I'm hoping that we will have QR codes before too long, to add additional information. The stones are located on the Sculpture trail very near Brass Art's Falls the Shadow and Lawrence Weiner's Water Made It Wet.
The title After comes from Theodor Adorno: 'Nach Auschwitz ein Gedicht zu schreiben ist barbarisch' (To write poetry after Auschwitz is barbaric) from Prismen: Kulturkritik und Gesellschaft (1963). After was published in my book Devolution, Great Barrington, MA: The Figures, 2000, and in Poetry Review, 93, 3 (2003): 32-35. There is a related piece called 'Not Reading After' in Covers, Cambridge, UK: Salt, 2007, which is transcribed from a performance at Camden People's Theatre, curated by Chris Goode and also published in the journal Shearsman.
Posted by Tony Lopez at 14:55 No comments:

HIGH ON THE DOWNS 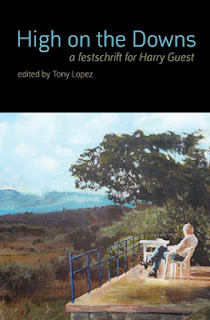 High on the Downs: A Festschrift for Harry Guest, edited by Tony Lopez and published by Shearsman books on Harry Guest's 80th birthday, was launched in Exeter at the Central Library on Monday 8th October, 7-9pm. The contributors are: Joan Bakewell, Michael Bakewell, Humphrey Burton, Jack Chalkley, Owen Davis, Peter Dent, William I Elliott, Peter Finch, Chris Finn, John Flower, John Ford, Peter France, John Greening, John Hall, Christopher Hampton, David Hare, Lee Harwood, Jeremy Hilton, Andrew Houwen, Peter Jay, Peter Josyph, philip kuhn, Ann Leaney, Tony Lopez, Rupert M Loydell, John Mingay, Bob Nash, William Oxley, Alasdair Paterson, Michael Power, Tim Rice, Anthony Rudolf, Lawrence Sail, Deniele Serafini, Martin Sorrell, Peter Southgate, Anne Stevenson, and Chris Ward.
Harry Guest, born in Penarth in 1932, has had a long and distinguished career as a poet, translator and teacher. He began to be published in the 1960s and Arrangements (1968), was his first book with Anvil Press Poetry, the specialist poetry publishing house run by Peter Jay. He has published twelve collections of poetry and his collected poems A Puzzling Harvest (2002). He worked as a teacher at Felsted School and at Lancing College before taking up a lectureship at Yokohama National University in Japan. He returned to England in 1972 and was Head of French at Exeter School until his retirement in 1991. Apart from his many collections of poetry, he is well-known as a translator from the French, German and Japanese, and his published translations include Post-War Japanese Poetry (with Lynn Guest and Kajima Shozo, 1972), and Victor Hugo: The Distance, The Shadows (1981). He has also published three novels: Days (1978), Lost Pictures (1991), Time After Time (2005). His non fiction writing includes The Artist on the Artist (2000) and a Traveller's Literary Companion to Japan (1994).
At the launch party there were short readings by the following contributors: Peter Dent, John Hall, Lee Harwood, Jeremy Hilton, Peter Jay, Ann Leaney, Alasdair Paterson, Lawrence Sail, Martin Sorrell, myself and Harry Guest. The title High on the Downs is from Harry Guest's Sixth Elegy; the book cover is based on the painting Harry Guest contemplating the visit to Montepulciano by Exeter artist Bob Nash.

We have lived elsewhere. How otherwise explain
the shock of recognition at the gap in the hedge,
that day high on the downs when the sun led you
to a place you knew though it was your first visit.
Harry Guest, 'The Sixth Elegy'
Posted by Tony Lopez at 18:08 No comments: 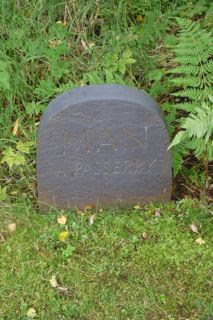 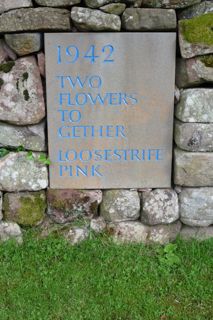