THE OTHER ROOM ANTHOLOGY 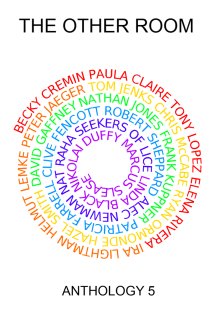 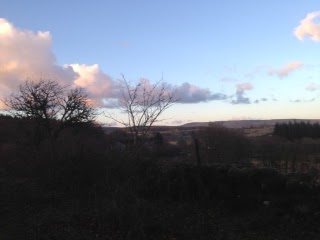 Friday evening, 26th April, Sara and I went on the Aune Head Arts Quiet Walk number 1, led by Sound Artist and Naturalist Tony Whitehead, 7.30pm to 10.30pm at Bellever Forest, just a mile south of Postbridge in the middle of Dartmoor. In the evening light we walked and ambled up woodland tracks near the Youth Hostel, taking plenty of time to stop and listen to the sounds of Dartmoor. It was a treat almost right away to hear our first cuckoo of the year in the distance at first, then it flew close by and continued to call. We saw a roe deer very close and heard chaffinches, wrens, blackbirds, greenfinches, sparrows, woodpigeons, songthrushes, goldcrests and other quite ordinary birds - but we really took time to listen and to hear all the calls. Higher up in a clearing we waited and listened for fifteen or twenty minutes for the last of the evening songbirds, and when the air changed as the light faded a songthrush's extraordinary repeated variations were echoed across the valley way into the distance.
Then we walked higher up towards Bellever Tor on the forest track in among a group of about twenty Dartmoor ponies, snorting and munching, tearing at the grass. As it grew really dark we saw the first planets, Saturn and Mars, coming into view, and then the mass of stars. It was very cold when we stopped on a high ridge and saw a red glow in the distance that turned into a red full moon rising over the moor, the colour draining out as it lifted higher in the sky. Then we walked down a steep rocky path by torchlight back to the Bellever Forest car park and drove back through Moretonhampstead and Dunsford to Exmouth. What an amazing experience and great company, thanks to Tony Whitehead and Aune Head Arts.
Posted by Tony Lopez at 13:22 No comments:

Simon Lewty’s exhibition ‘Absorption’ at the Art First gallery in London leads the viewer into a similar frame of mind as that which must be required to make his sumptuous and intricate works. It is not possible to follow what is going on in these graphic yet painterly works and remain a detached onlooker. For this sophisticated and highly developed body of work is in some respects a return to the mixed illuminated practice of the scriptorium. The artists and scribes who worked with pen, brush and coloured inks on early European masterpieces such as the Book of Kells, figured their miraculous stories with real and imagined creatures, decorated botanical flourishes and other marginalia that were sometimes at odds with the sacred texts they were supposed to serve. Whereas Simon Lewty has developed aspects of that practice but turned it directly inward towards the world of dreams and imagination. His ‘pictures’ are written in the neat but fully elaborated secretarial hand of another age, in long lines too long to follow easily back across the paper when you come to the right hand margin. The text is a kind of adventure narrative, made of fragmented and rewoven experience, and the written surface is varied with coloured inks phased in and out, and numbers and capitalised words. Sheets of paper are pasted together in the larger frames and written over, leaving slight traces of the joins, rather like those just visible somatic traces in calf vellum. His previous work, which may be explored in The Self as a Stranger (Black Dog, 2012), includes creatures, figures, buildings and bits of landscape – but the more recent works in ‘Absorption’ are pure handwritten text.
The ‘picture’ is an almost impossible page of writing, and in order to see it fully and follow, you must read it as you would read an old-fashioned hand made legal document such as a house deed or will. And some of those documents also have lines that are too long to manage easily, that make you wish you could trace along with a fingertip as you go. In some of the larger works the text is translated into Tachygraphy, the long obsolete shorthand system invented by Thomas Shelton (1601-1650?) and most famously used by Samuel Pepys for his Diary. Lewty has taught himself this shorthand system and employs it to fabulous effect in his large scale translated works in luminous coloured ink symbols that look asemic to the viewer but cannot be so in this alien script. We get a ‘dual text’ effect above and below or side by side and move between the two blocks, complicating further the reading and viewing experience. Here an artist’s practice has joined writing back into drawing and fused them both into something unforeseen that gives maximum scope for the imagination. It is an art with a very high estimate and expectation of its audience and that is something sorely needed at the present time.
Simon Lewty 'Absorption' 11 April -- 11 May at Art First, 21 Eastcastle Street, London W1W 8DD; images copyright Simon Lewty 2013 are included here courtesy of Art First.

THE DARK WOULD language art anthology


Edited by Philip Davenport
This is a moment in time when poets and many artists share the same primary material: language. Conceptual art, vispo, text art, outsider art, conceptual poetry, flarf, concrete poetry, live art, L=A=N=G=U=A=G=E, sound scores… THE DARK WOULD is a compelling document of now, alchemising text into art into text.
THE DARK WOULD gathers work by over 100 contributors including some of the most noted artists and poets alive today.
THE DARK WOULD comes in two volumes, one paper and one virtual, sold both together for £29.99, published by Apple Pie Editions. The book retails at £29.99 for both paper and electronic volumes together and is available from Amazon, Apple Pie Editions website (distributed by KFS) the Tate and LMAKprojects in New York.
Support the independent publisher, get it from direct from Knives Forks and Spoons Press. 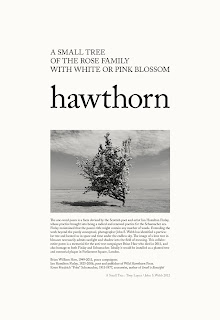 Working with friends and collaborators, I've just started a site for prints called Orcombe.com. The first publication is a print made in collaboration with my friend the photographer John S. Webb, who lives and works in Sweden. The print is a combination of four modes shown together: poem, image, commentary and memorial, and it makes connections between the works of the artist Ian Hamilton Finlay, the economist Ernst Schumacher, and the peace campaigner Brian Haw, who lived on Parliament Square, London, for almost ten years to protest against UK and USA foreign policy. I have taken up the form of the one-word poem, invented by Finlay, and echoed several of his works in this new composition that incorporates commentary, rather like Finlay's Heroic Emblems (Calais, VT: Z Press, 1977) that incorporated commentaries by Professor Stephen Bann.
The print is called A Small Tree. I had in mind Finlay's Small Is Quite Beautiful (stone, with Richard Grasby, 1976, collection Scottish Arts Council) because it picks up on Schumacher's most influential work and plays with that nice distinction between American and Scottish usage of the word 'quite'. My poem is in fact thirteen words including three colours and the important diminutive; the colours are conveyed only in language. It took many months before John Webb was able to get the right kind of flowering Hawthorn image, quite an unusual shot, on the coast at Ribbersborg, Malmo, near where he lives.
The print is available only through the site Orcombe.com.
Posted by Tony Lopez at 12:52 1 comment: