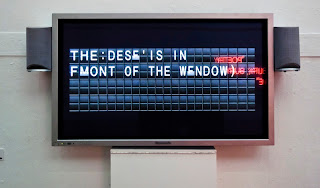 Just heard that my animated text More & More has arrived on time and will be shown at the Arnolfini in Bristol for the Ian Hamilton Finlay Weekend Friday 30th August and Saturday 31 August 2013. The weekend is a special event for the Ian Hamilton Finlay Exhibition, that is currently showing at the Arnolfini, a really comprehensive show of Finlay's cards produced right through his career from 1963 to 2006. The weekend programme includes talks by Graham Rich, Stephen Bann, Harry Gilonis, OEI Magazine, film screenings of Beatrice Gibson, The Tiger's Mind, Ian Hamilton Finlay's Carrier Strike, films by Karl Holmqvist, and Kriwet, a concert by Amor de Dias, a DJ set by Christian Flamm, Sue Tomkins audio work, and a performance by Kasia Fudakowski. Works by Victoria Bean, Antonio Claudio Carvalho and my More & More are to be shown. There is a benefit auction Friday 30th August at 7.30pm to help to maintain Finlay's garden Little Sparta in Dunsyre Scotland. The auctioneer will be George Ferguson, Mayor of Bristol. I went on an exhibition tour and talk by Stephen Bann last Saturday with Graham Rich and Lesley Kerman. It was great to hear about Finlay's print projects and his various disputes and campaigns. I really enjoyed the visit to the Finlay garden at St George's church in Bristol.
This photo of More and More was taken at the Sentences exhibition in Bury Art Museum, 2011 by Jari Kuusenaho; the animation is by ranfirefly, technical development by Tom Lopez of Microserve Bristol. The work was also shown at Poetry for the Eye, TR1 Gallery, Tampere, Finland 2012, and at Visual Poetics, South Bank Centre, London, 2013.
Posted by Tony Lopez at 17:36 No comments: