I'm giving a reading for UNO at the Voodoo Rooms, 19A West Register Street, Edinburgh, EH2 2AA, at 8pm, 25 July 2011 with Hank Lazer, Susan Schultz, Biljana Obradavic and Dorothy Alexander.
I've been working through the summer with the editor Bill Lavender and designer Carrie Chappell of the University of New Orleans Press on the production of the North American edition of my book Only More So. UNO currently has a summer writing programme in Edinburgh.
Posted by Tony Lopez at 14:49 No comments: 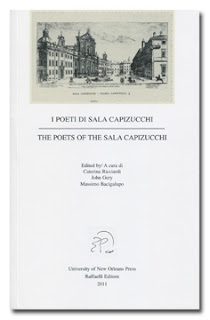 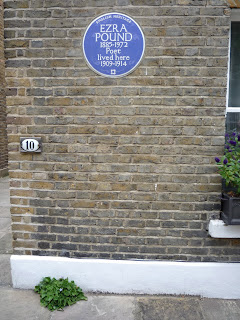 Just back from the Pound Conference in London. Four days of papers with three strands running at once at the Institute for English Studies in London University.
Among those that I saw were talks by:
Evelyn Haller of Doane College on the Pisan Cantos and the fashion houses of Charles Worth and Jeanne Paquin;
Gavin Selerie of London on London Ghosts and their Haunts;
Jo Brantley Berryman of Cal Arts on Pound and Hokusai;
Ira Nadel of UBC on Picasso and Pound;
Stephen Romer of Tours on Pound's views on London architecture;
David Ewick of Tokyo Woman's Christian U on Japanese No: Ito, Kume, Kori, Pound and Yeats;
Tateo Imamura also of TWCU on Hemingway, Pound and Japanese artist Tamijuro Kume;
Dorsey Kleitz also of TWCU on Ito, Pound, Yeats and At the Hawk's Well;
Karlein Van Den Beukel of London South Bank on Pound and Modern Dance;
Keith Tuma of Miami Ohio on Sons of Pound (Whigham, mostly);
Julian Stannard of Winchester on Bunting's Metropolitan Shudder;
Annabel Haynes of Durham on Bunting, ethics and politics;
Richard Parker of Sussex on Zukofsky's London;
Jeff Grieneisen of the State College of Florida on Pound and James Wright;
Alan Golding of Louisville on Rachel Blau DuPlessis' Drafts;
Gary Leising of Utica College on Geoffrey Hill's Mercian Hymns as mini Cantos;
Gareth Farmer of Sussex on Veronica Forrest-Thomson's remarkable unpublished criticism on Pound;
Ryan Dobran of Cambridge on J H Prynne's Aristeas;
Helen Carr of London on Pound and Desmond Fitzgerald;
Catherine Paul of Clemson on HD's End of Torment about Pound's WW2 radio propaganda;
David Moody on the 'f - word';
there was a panel of presentations on the forthcoming new edition of the Pisan Cantos, with Ron Bush of Oxford and David Ten Eyck of Nancy, with respondents including Kenneth Haynes of Brown;
also a panel on Ezra Pound in Context (Cambridge University Press, 2010) with Ira Nadel, editor and Ron Bush, Rebecca Beasley, Demetres Tryphonopoulas, Catherine Paul, Massimo Bacigalupo, and others. There was a film of Canto 116 by Bernard Dew, a special reading by Keston Sutherland and Tim Atkins at the Poetry Library on the South Bank, and a conference reading by a dozen or so poets including Ron Smith, Biljana Obradovic, Wayne Pounds, Stephen Romer, Mary de Rachewiltz, John Gery, Jeff Grieneisen, Richard Parker, Gavin Selerie, Julian Stannard and me.
As usual I missed lots of interesting talks, not only because of parallel sessions but because there is just so much going on. It was good to see so many friends and hear some really good papers and very varied poetry readings.
I went on the Imagist Walk in Kensington and in Bloomsbury led by Robert Richardson of De Montford. The photo above is of Pound's lodging at 10 Kensington Church Walk, near Kensington High Street tube, where there is an English Heritage blue plaque for Pound.
Posted by Tony Lopez at 15:13 No comments: 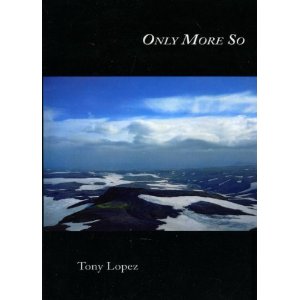 Only More So is published in North America by the University of New Orleans, UNO Press and is available now on Amazon. A poem in ten prose sections, 254 pages including a bibliography of sources and index. Cover photo: Fimmvörðuháls Iceland, 1997 © John S. Webb.