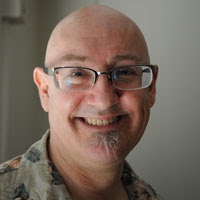 Last night I went to see cris cheek perform at Studio 3 in Dartington. The new performance work in progress was called Monday Morning, on and offing God's Commons. Some torn strips of text fragment and other material on paper was collaged into a palimpsest of printed and handwritten language and also neatly woven to make partly readable text surfaces that had been photographed and were projected as a changing backdrop. In front of this, lit up by the projector and casting shadows on the back projection, cris was reading from hand held text and from the text on the wall.
Some earlier versions of this performance, incorporating documentation of projection and previous live action were also part of the projected sequence, which included interiors and architectural forms. There was an intermittent scratchy violin sound track, previously treated voice recordings and the whole event was driven by cris's extraordinary capacity as a voice performer. There were at least two cameras documenting this event, so I'm hoping someone will be able to provide me with an image or two for posting here. Thanks to Larry Lynch of Dartington College of Arts for putting on this wonderful event.
It was great to see cris perform at the superb Dartington studio 3. I haven't seen him for a few years, last time I think we had lunch with a big crowd at Ravi Shankar's in Euston, when Bob Perelman was working for a year at Kings College in London. Cris is now on the faculty at Miami University of Ohio, in Oxford, Ohio.
Books received: cris cheek, part: short life housing. Toronto: The Gig, 2009.
Posted by Tony Lopez at 11:58