ANDREW DUNCAN THE COUNCIL OF HERESY 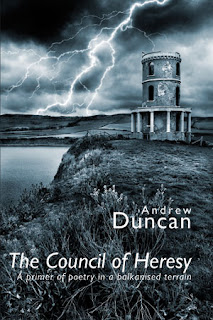 Andrew Duncan's book The Council of Heresy: A Primer of Poetry in a Balkanised Terrain was published in 2009 by Shearsman. This is a book about contemporary British poetry written by a poet and editor with a very developed and broad sense of what is going on. His experience as the publisher and editor of the magazine Angel Exhaust, his own writing practice, and his wide reading and general curiosity, qualify him as a guide to the scene. His critical work has been going on for some time now, a whole series of books is in progress. I have known about this for a while without really investigating properly and I can see from The Council of Heresy that it is an ambitious and entirely serious attempt to make sense of what is there in this important aspect of British culture. I had to read this book because it refers directly to my work. I'm very glad that I did read it and I'm grateful for his whole project.
We take it for granted now in the world of Art that there is a whole range of different practices going on at the same time: that there is a very big difference between say the work we know as Brit Art and that of best known painters such as David Hockney and Lucian Freud, and then again the thousands of amateur painters who are concerned with rendering likenesses of pretty landscapes in watercolour. There are many aspects to this big change that is now well established by the existence of the multiple Tate museums: Tate Modern and Tate Britain, Tate St Ives and Tate Liverpool, and many high quality museums throughout the regions. You could tell this story in a number ways using key individuals or institutions, networks, prizes, galleries, art schools etc, but no-one would doubt that there has been a big change and that there is a variety of practices all contributing to this richness and complexity.
It would be an over-simplification to say that in poetry the Sunday painters are in control. But it is almost true. The most ambitious and advanced poetry is largely unknown. The most praised, best known and most prominent tradition is backward looking and quite limited in scope. It is only relatively recently that the strangle hold of a small group of publishers to promote their own and drown out the opposition has been loosened somewhat. It is a failure of imagination and courage to praise the mediocre and to thus limit the possible. Consider the Arts Council funding a pamphlet series run by Faber in 2012. So Andrew Duncan's work is very useful in setting out a range, identifying different camps, and attempting to apply similar descriptive processes and criteria to different kinds of poetry. He writes to give readers a way into the Avant-Garde and to understand where the divided scene comes from. He investigates the influences of Kathleen Raine and Eric Mottram in the same chapter. He examines Peter Barry's account of the poetry wars in the 1970s. He gives space to unusually perceptive readings of Barry Macsweeney, Kelvin Corcoran and Maggie O'Sullivan. I haven't really been much interested in the careers of Kathleen Raine and Anthony Thwaite, but if Duncan finds something in them I think I ought to at least have a look. I find his writing radically uneven, his conclusions sometimes surprising and his sense of what is going on elsewhere (particularly in USA) very limited. But he is a very perceptive reader with insights you won't get anywhere else. This is a valuable book for anyone interested in what is happening in British poetry now and in the recent past; I plan to read the others and catch up.
The cover of The Council of Heresy is based on a photo "A storm approaches Clavel Tower, Dorset" copyright 2006 by Blackbeck Photographic. You can find Andrew Duncan's author page at Shearsman Books here.
Posted by Tony Lopez at 11:05