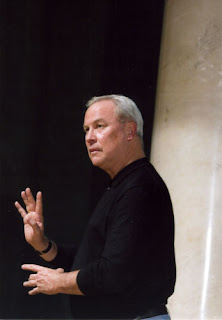 On 13 February 2012 I saw a performance at the Royal Northern College of Music, Manchester, by the great experimental theatre director Robert Wilson.

The wide stage was set out with four elements: a lectern, a big landscape-shaped drawing board, a large screen with projected image and a chair. When Robert Wilson came on to loud applause he just stood by the lectern without moving for quite some time, longer than at first seemed appropriate, gathering everyone's attention and then holding on for somewhat longer, building up tension and anticipation, making the audience wonder what he was up to, but none of us, I think, was in doubt that this man was taking his time in order to get our fixed and proper attention, to remind us we were at a performance. It was something to watch. He began to talk about what was the source of his work in the theatre. He briefly described his background and education (he grew up in Waco, Texas, and trained in Architecture at the Pratt Institute in New York) and he described two important meetings that had a profound effect on his career.
The first one was a chance meeting in the street with a black 13 year old boy who was in trouble and just about to be arrested and taken away by the police. Wilson intervened and discovered that the boy was deaf and dumb, that he had got into trouble because of his disability. The boy was to be institutionalised. There was no facility for the boy's special educational needs. Wilson managed to adopt the boy legally through a court procedure, on the basis that it would cost the government a great deal to keep him in whatever institution he would be put in. Wilson worked with this boy in his early theatre productions, putting him onstage as an actor. It was the experience of communicating with this boy at first with movement and felt vibration that helped Wilson develop his radical ideas about theatre.
Another meeting came about because Wilson was played a tape by one of his ex-professors of a young man with autistic disorder. The tape was a kind of fast-paced verbal performance based on variation and repetition of non-identical words and phrases. Wilson gave a version of this remarkable performance and told us how he met the young man, Christopher Knowles, and took him out of the institution that he was kept in to live with Robert Wilson. Wilson worked with Knowles in the theatre, taking his unusual ideas and verbal constructions, and working with them to make new theatre works, such as his world renowned opera with Philip Glass, Einstein on the Beach.
Wilson talked a good deal about how he structured his theatrical work, separating out a framework of scenes through visual diagrams and identifying different structures in the very long works he is known for. He told us about a worldwide career in experimental theatre and said something about The Life and Times of Joseph Stalin and about A Letter for Queen Victoria and some other plays and operas. He drew diagrams on the large landscape white board with different coloured pens, taking time  to explain about the abstract patterns he visualised and planned with, and insisted on the prime importance of movement and timing in his theatre direction. Only after the movement and timing was established did he attend to the words of the script.
For quite a long time he worked at the board, breaking off every so often to act out a movement or a bit of verbal construction. He tore off the paper sheet he was working with and started another. He talked about working with various composers and star actors and singers including Jessie Norman. He did a little piece about Jessie Norman and a 9/11 performance where she stood still on the stage and had great presence. And he acted out this having great presence by standing still on the stage and having great presence himself. Then he started to use the screen and projected images, calling for the light on the large board to be lowered and changing the images as he talked us through some of his design drawings and photos of productions. In many of them there was a chair on stage as an important prop, sometimes it was suspended in air, sometimes lowered on wires. The lit chair onstage became a kind of emblem of all the chairs he showed us in images of many productions. The theatricality of the event in terms of the use of the stage and lighting, the cut-down nature of the performance in front of us, the reference to other performances in the slides, the use of light and emotional intensity -- all of this was very powerful. It was a terrific experience in the theatre.
I was really impressed by this performance. It is one of the best things I've ever seen in theatre. I was left with a sense of concern about the disadvantaged boys who in Wilson's account seemed to be the motivation for his work. He gave the impression that it was their different way of understanding that contributed to the vision of his theatrical work, that he couldn't have made the work in the way he did without them. I wondered about the power relations in those relationships, about a single man with the social advantage and confidence to adopt a disadvantaged boy. I wondered about the boys' development as they grew older. I wondered what they might be doing now. I don't think that it would be possible to work like that today in UK, though it certainly would be possible elsewhere. I can't imagine a single man being allowed to adopt a disabled child. I was also intrigued by the extent of the collaboration and the question of intellectual property in the work. I certainly would have asked questions about this had there been any time or framework for questions in that event.
Posted by Tony Lopez at 18:08