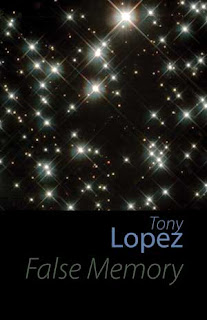 My best known book False Memory has just been published in a new edition by Shearsman Books of Bristol. I'm really grateful to Tony Frazer for a great job on the production. The first version of this book was 6 out of the 11 poem sequences, published by Geoffrey Young's great USA press The Figures in 1996. Then Ken Edwards' Reality Street published Data Shadow in 2000. The complete book was first published by Salt in 2003. Now we have had the opportunity to make some minor corrections and include a new introduction that was specially written for this edition by Robert Hampson of Royal Holloway University of London. The cover photo of False Memory is 'Ancient, White Dwarf Stars in the Milky Way Galaxy', taken by Hubble Space Telescope, credit to NASA and H. Richer (UBC).
Posted by Tony Lopez at 10:46